Why People Are Dying from Vaping in the U.S. and Not the U.K.

Although experts canvassed by VICE acknowledged the U.K. is in no way immune to nicotine-related health problems, the American vaping crisis that has produced at least 1,000 cases of illness and roughly two-dozen deaths is pretty much nonexistent over there. There also appears to be far less official concern that vaping is a gateway drug sucking otherwise uninterested teens into a lifetime of nicotine use. Without lobbyists killing oversight and 1990s-style drug war hysteria hamstringing policy, U.K. officials have produced a piecemeal regulatory system that carefully monitors nicotine levels in vape products. 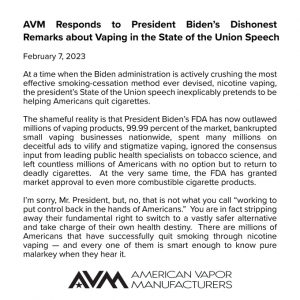 AVM responds to State of the Union 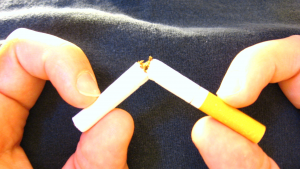 SOTU: If Biden Was Serious About Reducing Cancer, He’d Embrace Tobacco Harm Reduction – Not Oppose It

Tobacco harm reduction should be on Congress’ agenda